Home → Success Stories → Kevin and Clint are Home for Christmas!

On Saturday, December 18, 2010, an Oakland Police Officer knocked on the Shelter’s front door.  We had just closed and it was storming outside.  The patrol officer was soaking wet and he was carrying a dog wrapped in a blanket.  He said he had found the dog laying on the side of the road.  We rushed him inside and began to examine him.  The grey schnauzer was wet, freezing and non-responsive.  His temperature was a very cold 95 degrees (should be at least 101).  His front leg appeared to be broken and he had bruising all over his body.  We also noticed that he had a bb pellet in his lower eye lid and what appeared to be an entry hole from a pellet on the top of his head.  He looked terrible and we were all worried he wouldn’t survive.  We then scanned him and were happy to hear the beep that indicates the dog had a microchip.  We immediately called his owners and arranged to meet them at Berkeley Pets Emergency on University.  The vets there treated his wounds and he had surgery to fix his arm.  It appeared that Kevin’s wound’s were more consistent with having been kicked/beaten then hit by a car.   Kevin’s owners were happy to have Kevin back but were distraught because his brother, Clint, was still missing.  They contacted the media and started a blog http://helpkevinfindclint.blogspot.com/ to see if they could find any leads to the person(s) responsible for Kevin’s condition and to find Clint.  Luckily, a family saw a news story about Kevin and realized that the dog they had found wandering in the rain a few days before was Clint!  They contacted the owners and the two dogs are now reunited!

This story has a happy ending!  It reminds us the importance of making sure your pets are microchipped!  Microchipping is oftne the only way pets can be reconnected with their owners when they are lost.  Make sure to call your pet’s microchip company to ensure that the contact information they have listed for you is correct.  This story also reminds us, especially during the busy holiday season, to keep an eye on our pets.  When we have lots of visitors coming and going from our homes, make sure to keep doors shut and our pets safely inside a separate room so they can’t take off. 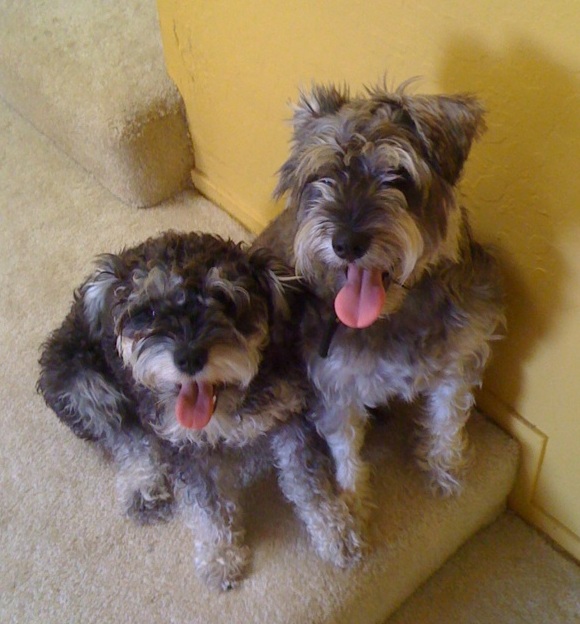